I’ve been on a DIY jewelry kick for awhile, and I’ve had some shrink plastic in my stash for about six months that has been begging to be turned into something.

Combine these two things with some Dimensional Magic and you have a Shrinky Dink necklace!

This Shrinky Dink jewelry project is actually a little bit of a CraftFail because it didn’t go as planned, but it might be okay.

I’m wondering what you think and I want you to let me know in the comments. First I’ll walk you through the craft.

Shrinky Dinks shrink to about 1/3 of their original size and get nine times thicker. It’s magic, people. The nice thing about Shrinky Dinks is that even though they get smaller and thicker, they’re still very lightweight.

You also need to remember to punch your holes before baking your Dink. If you don’t, you’ll have a heck of a time trying to get them punched afterwards.

I’m pretty sure the only way it would happen is if you used a drill. I learned from experience and after throwing a few Dinks in the garbage!

You will first need to cut a circle shape out of your Shrinky Dink material. I used a circle cutter and did about a 3 3/8″ circle (it was completely random, I just made sure my stencil fit), but you can also trace a shape and cut it with scissors.

I taped down the stencil and filled in with the Sharpie color of my choice.

I removed the stencil and then went back in to thicken up the lines in certain areas where I felt that they were a little too thin.

I punched a hole in the top of my disk with a regular sized hole punch. I then used my brown Sharpie to create vertical lines that were as evenly spaced and straight as I could make them. I eyeballed it.

I baked the Dink. I was like a kid in a candy store, sitting there with the oven light on, watching the Dink shrink. There were some precarious times when I thought it was going to fold over on itself, but it ended up righting itself and shrinking correctly.

The instructions say if it does fold on itself, you can untwist it and flatten it out while still hot. Luckily this didn’t happen. I removed my Shrinky Dink necklace from the oven and allowed it to cool.

I finished by putting Dimensional Magic on the pendant and allowing to dry. Notice in this photo that the Sharpie ink colors got much darker than they were originally.

Also notice that the Dimensional Magic made the ink of the bird bleed but NOT the stripes. Weird, huh? To finish the Shrinky Dink necklace piece, add a jump ring and a chain.

Everyone that I’ve asked so far likes the blurring of the bird, but I’m asking you – what do you think of my Shrinky Dink jewelry? Feel free to be honest. Is it worth wearing? Or should I flush it down the toilet?

Afterthoughts on This Project

I have two thoughts on my Shrinky Dink necklace now that it’s over and done with.

If you’ve had success with Shrinky Dink jewelry, I’d love to know in the comments!

Remember that the design will shrink to 1/3 the size after cooking, so be sure to scale appropriately.

Did You Make This Project?

Also if you like handmade jewelry and accessories using Dinks, visit some projects from my friends below: 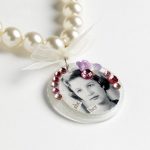 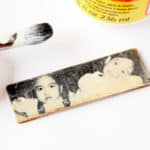 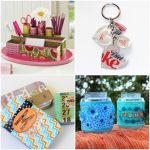 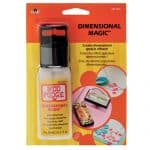