If you want the colorful look of confetti as part of your celebration, try these DIY confetti balloons. It’s easy to do and inexpensive!

Skills Required: None. Adding confetti to balloons is one of the easiest things you’ll ever do. Even if you “can’t craft,” you can do this project.

Hi! Jessica here from The Confetti Bar, the coolest confetti shop on the block, where we believe happiness should be celebrated!

It’s no surprise that confetti balloons are one of my favorite party decor items, but let’s be real: stuffing balloons with confetti should be an Olympic sport!

So why not add confetti to the outside of a balloon, where it can really shine? And I’ve got the 411 on how to do just that! You’ll love this confetti balloons DIY.

The confetti balloons DIY concept here is super simple: just add a little Mod Podge to the bottom of your balloon, sprinkle on some confetti, and let dry.

BUT be careful — in order for the balloon to still float (if you’re using helium), you only need a super light sprinkling of confetti! If you add too much, it will be too heavy, so a light dusting is best.

But want to know the good news? Even if you go a little overboard with the confetti and your balloon ends up being too heavy, you can still let them roam on the floor for festive ambience.

These confetti balloons are so fun and pretty to look at! And just imagine the different balloon/confetti color combos you can dream up.

We have tons of pre-made confetti options in our confetti shop, and if you want something extra special we also can make custom confetti.

Want even more confetti fun? Here are some other confetti projects we think you’ll love: 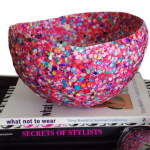 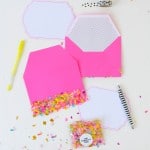 How to Decorate an Envelope with Confetti 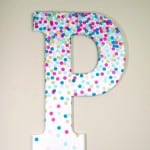 DIY Pineapple Centerpiece Made with Confetti