Disclosure: This post is sponsored by Sony Pictures in connection to the home release of Hotel Transylvania 3.

Do you have a Hotel Transylvania obsessed child in your house? My niece is six years old and LOVES the films. I got to watch them for the first time with her a few months ago and can I tell you how cute and fun these movies are?!

This year, the fabulous folks at Sony Pictures released a third movie in the series: Hotel Transylvania 3! You can join your favorite monster family on a luxury monster cruise vacation.

What will you find on the cruise ship? All sorts of fun activities like monster volleyball and moon tanning! During their vacation, Drac falls for the ship captain Ericka, who hides a dangerous secret that could destroy all of monsterkind. What will happen? You’ll just have to find out by watching the movie!

Hotel Transylvania 3 releases on Digital tomorrow and Blu-ray and DVD October 9th! To celebrate, we’ve decided to put together some funny dog costumes for Halloween. Two of our favorite characters are Blobby and Tinkles (Dennis’s pet dog). Is it just me, or does Tinkles have a striking resemblance to my pug Otto???

This costume was inspired by the part in Hotel Transylvania 3 where Dennis tries to sneak Tinkles onto the cruise disguised as his “friend, Bob.” Dennis dresses Tinkles in a trenchcoat and small hat – it’s hilarious!

Here’s how to make the costume.

Keep in mind the size of the felt pieces might have to change based on the size of your pet, but the hat is intentionally small.

You are going to attach the small oval on the larger strip of light brown felt as shown.

Place a line of hot glue on the edge of the light brown felt.

Attach the smaller oval to the strip of felt with the hot glue, working your way around the oval.

When you reach the end, cut the excess off and then hot glue the flap over to close.

Turn the top of the hat right side out.

Fold the larger circle in half and cut out the center, approximately the same size as the base of the top of the hat.

Hot glue the brim to the top of the hat. You don’t have to be too exact because the band is going to cover it.

Attach an elastic strap that fits your pet to the inside of the hat with hot glue. You are ready to go!

What do you think of Otto’s little Tinkles hat? I think it looks hilarious on him! I added a dog trenchcoat I got online and the costume is complete! Doesn’t he look so cute?!

But of course I can’t forget about Yoshi’s Blobby costume.

You might think this costume was a bit of a challenge, but it was actually quite easy!

Before you get started, you need to decide how much cotton cording you need. Our dog Yoshi is 27 lb., and we used 18″ of cording per band. So we used about 10 yards of cotton total for her with the outfit and hat; 8 were used on the outfit.

You can do more or less rings depending on how much cording you want to purchase. Simply measure the circumference of your dog’s chest and subtract about six inches for the elastic. That’s how much cording you need for one ring. Then decide how many cords you want! Add two yards for the hat.

You’re going to cut a six inch length of elastic and glue to one end of the cotton cording.

Tip: if you misjudge how much elastic you need, you can always cut it and add more or hot glue to overlap if it’s too large.

Cut a length of the green Duck Tape (to match the cording) and place the sticky side up. Place the cording down on the Duck Tape.

Wrap the Duck Tape around the cording, being sure to insert the elastic on the other end and make a circle (closing it in with the Duck Tape).

You can add a dab of hot glue and another piece of Duck Tape to secure. You’re done with one ring – now make as many more of these as you like!

For the hat, you’ll start with a 11″ length of cotton cording. Wrap it with Duck Tape.

Join it into a circle with hot glue.

We made several more rings the same way, going about 1″ shorter on the cotton cording each time.

Eventually the hole gets small enough that you can cut a small piece of cotton cording, cover it in Duck Tape, and fit it into the circle. Your funny dog costumes are almost complete!

Glue the rings into a layer “cake” (largest at the bottom, smallest at the top!) with hot glue. Then add the elastic ribbon to go around your dog’s chin.

Is Yoshi not the cutest Blobby? I think her outfit turned out so cute!

Let me know what you think of the Hotel Transylvania movies and the costumes in the comments! Happy Halloween! 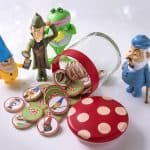 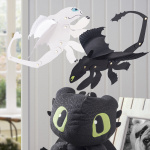 How to Make a Paper Plate Dragon